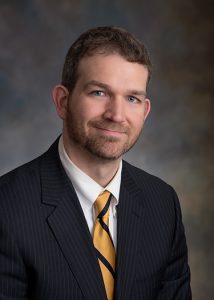 Matthew R. Williams practices primarily in the areas of criminal law and tax controversy before trial and appellate courts alike, at the Municipal, State, and Federal level.  His practice is based out of Topeka, Kansas but he travels anywhere a zealous defense is needed. Learning under legendary trial counsel William K. Rork he has aggressively defended the Accused at trial ranging from 1st degree murder to DUI, Jessica’s law cases to civil forfeiture, Drug distribution to Drug tax settlements.

Matthew took the long road to practicing law.  Enlisting as an infantryman in July 2001 less than two years later he found himself in Iraq as a paratrooper with the 82nd Airborne Division.  After transitioning into the Kansas Army National Guard he was mobilized to New Orleans in the aftermath of Hurricane Katrina in 2005 and deployed to Kosovo in 2007.  After graduating from Washburn University in 2010 he attended the accelerated course of Officer Candidate School (OCS) at Ft. Meade, South Dakota. After completing OCS in August, 2010 Matthew immediately began law school at Washburn University School of Law. After graduating law school Matthew was admitted to the bar in Kansas in 2013.   Prior to attending Officer Candidate School he attained the rank of Staff Sergeant.  He is currently a Captain in the Kansas Army National Guard